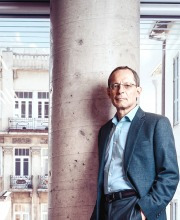 Professor Eugene Kandel is the co-Chairman of Start-Up Nation Policy Institute (SNPI) which aims to promote strategy and economic policies to ensure that Israel maintains its leadership position in technological innovation and leverages its position to generate value for its citizens. Professor Kandel is the former CEO of Start-Up Nation Central, a non-profit organization dedicated to strengthening Israel’s innovation ecosystem and connecting business, government, and NGO leaders from all over the world to the Israeli  people and technologies that can help them solve their most pressing  problems.

Between 2009 and 2015 Professor Kandel served as the Head of the Israel National Economic Council and as the Economic Adviser to the Prime Minister and played a central role in all the government’s major economic policy decisions.  Kandel is the Emil Spyer Professor of Economics and Finance at the Hebrew University of Jerusalem. He holds a BA and an MA from the Hebrew University, and an MBA and a Ph.D. in Economics from the University of Chicago’s Booth School of Business. Professor Kandel’s primary areas of academic expertise are Financial Markets and Financial Intermediaries, and his research has been published in world-leading finance and economic journals. His research  was instrumental in the 1997 redesign of the Nasdaq trading rules.