We provide sufficient (and "close" to necessary) conditions for equilibrium existence in standard first price auctions with independent private values. These conditions allow for atoms in the distributions of players' valuations, generalize many of the sufficient conditions in the existing literature, and clarify why an equilibrium sometimes fails to exist. We also show that regardless of whether these conditions are satisfied, it is enough to modify the tie-breaking rule at one particular bid, which we identify, to guarantee
equilibrium existence.

Choosing to change: what big decisions tell us about our selves?*


The lecture is hosted by the Federmann Center for the Study of Rationality and will take place at 130 hall, Feldman building 1st floor, Edmond J. Safra

The talk presents some of the main results of the book by this title. It will focus on why Israel succeeded to catch up with the growth frontier in a region that is much less developed and it will also explore the fact that Israel is still below the advanced countries. The talk will then focus on the various costs of the Israeli Arab conflict. It will also show how the Intertemporal approach to the balance of payments can fully account for the large fluctuations in the Israeli trade deficit and how high inflation in Israel followed the monetary model with rational expectations. Finally, I will present Israel as an experiment in neoliberal policies and show that these did not boost growth, but raised inequality.

Abstract : We study auction design for bidders equipped with non-expected utility preferences that exhibit constant risk aversion (CRA). The CRA class is large and includes loss-averse, disappointment-averse, mean-dispersion and Yaari's dual preferences as well as coherent and convex risk measures. Any preference in this class displays first-order risk aversion, contrasting the standard expected utility case which displays second-order risk aversion. The optimal mechanism offers "full-insurance" in the sense that each agent's utility is independent of other agents' reports. The seller excludes less types than under risk neutrality, and awards the object randomly to intermediate types. Subjecting intermediate types to a risky allocation while compensating them when losing allows the seller to collect larger payments from higher types. Relatively high types are willing to pay more, and their allocation is efficient. 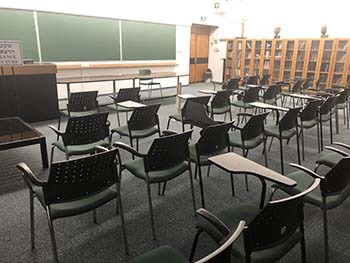 It is well documented that economic agents' behavior is often incompatible with exact optimization. We believe that economic theory has overemphasized exact optimization, especially its implications for economic agents' behavior. The reason is that in most real-life applications, there is some imprecision in the speci_cation of the model, in particular in the speci_cation of the preference over the possible outcomes. Therefore, a rational economic agent may, or even should, forgo exact optimization in a single economic model with well-de_ned parameters, and prefer behavior that is approximately optimal in a whole class of economic models whose di_erences reect imprecision in specifying the parameters of the model. Moreover, it is desirable that the economic agent's behavior exhibits gradual change as the model changes. We call this type of behavior robust optimization.

It is proved that: (A) a _nite Markov decision process (1) admits a robust optimization when the parameters range over all valuation { linear utilities (over streams of payo_s) that satis_es the time value of money principle, and


YOU ARE CORDIALLY INVITED

Using cryptographic tools such as zero-knowledge proofs, we present a general technique for a mechanism designer to endogenously commit to an undisclosed mechanism, while still proving its properties of interest, such as incentive compatibility and individual rationality, to agents, and at the end of the day proving that the mechanism was indeed run as planned, including that any random draws performed by the mechanism were fair. In a precise sense, agents learn nothing more about the mechanism than its outcome, and in fact, only its realized outcome if the mechanism is randomized.

Preliminary applications include bargaining, negotiations, ad auctions, and more. Finally, using ideas from prior literature on cryptographic hiding of bids in auctions, we also present an extension that allows both the mechanism and the bids to remain private, in the form of a general *un*revelation principle, opening the door for a new layer of mechanism customization that we call "revelation design." No prior knowledge in cryptography will be assumed.

Bio:
Yannai A. Gonczarowski is an Assistant Professor of Economics and of Computer Science at Harvard University—the first faculty member at Harvard to have ever been appointed to both of these departments. Interested in both economic theory and theoretical computer science, Yannai harnesses approaches, aesthetics, and techniques traditionally originating in computer science to derive economically meaningful insights. Yannai received his PhD from the Departments of Math and CS, and the Center for the Study of Rationality, at the Hebrew University of Jerusalem, where he was advised by Sergiu Hart and Noam Nisan. Yannai is also a professionally-trained opera singer, having acquired a bachelor’s degree and a master’s degree in Classical Singing at the Jerusalem Academy of Music and Dance. Yannai's doctoral dissertation was recognized with several awards, including the 2018 Michael B. Maschler Prize of the Israeli Chapter of the Game Theory Society and the ACM SIGecom Doctoral Dissertation Award for 2018. For the design and implementation of the National Matching System for Gap-Year Programs in Israel, he was awarded the Best Paper Award at MATCH-UP'19 and the inaugural INFORMS AMD Michael H. Rothkopf Junior Researcher Paper Prize (first place) for 2020. Yannai is also the recipient of the inaugural ACM SIGecom Award for Best Presentation by a Student or Postdoctoral Researcher at EC'18. His first textbook, "Mathematical Logic through Python" (Gonczarowski and Nisan), which introduces a new approach to teaching the material of a basic Logic course to Computer Science students, tailored to the unique intuitions and strengths of this cohort of students, is forthcoming in Cambridge University Press.